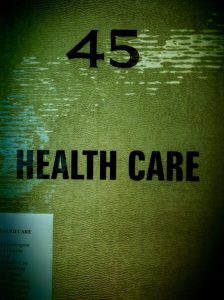 Over the last several years, we have seen remarkable progress in the ongoing reformation of our health care system. Vermont has been moving in a solid and straightforward direction in the reform of how we deliver health care to the whole of our population for the past twenty years. We have recently grown our Blueprint for Health, which allows for a more holistic provision of care within the confines of our present insurance-driven system. Across the state, smaller medical centers and new, innovative programs are returning to the practices of the past — the kind of care we think of when we think of the old rural family doctors — more home visits, better nutritional care, better hospice care, a stated policy to keep people in their homes as long as possible, better office visits and, as importantly, the means to pay for it through pay schedules that encourage providers to prevent illness rather than react to it under an emergency basis.

October 2013 saw the roll out of the federally mandated health insurance exchange, which we call Vermont Health Connect, where patients and businesses can shop for the right insurance plan for themselves and their business in a transparent way. No surprises when you receive your benefit book from your provider. The exchange will allow Vermont to draw down tens of millions of health care dollars and tax benefits that will finally begin to provide some relief from the rising costs of insurance premiums.

The roll out was rough. Design and some expenditures on the software was delayed due to lawsuits that were not settled until July 2012, leaving 15 months for implementation. The private contractor hired by Vermont, the federal government and many other states, did not deliver quality product, and our local implementation team was overwhelmed. This resulted in spotty success and many unhappy, confused and fearful customers. To this point, the collaboration between the state and the insurance companies who applied to be part of the Vermont Health Connect has been wonderful, and to our knowledge no one has suffered the loss of insurance due to the roll out. The state is working to correct the problems and as time goes by, we are witnessing far more successful sign ups per capita than any other state.

What does this mean for implementation of a universal, or single payer, health plan in Vermont. Practically, very little. But the perception of inadequate programming and implementation is real. We remain closer than most states in moving from our present system to a universal system because of the work we have done for the past decade in reforming the way we deliver health care. (I choose to call it a “universal” system rather than “single payer,” but others will not. In this argument, the terms are interchangeable, but I think the difference is important. When we have universal access to health care, there will be different payers–the individual or family, Medicare, Medicaid, and what have you.) But we will not get there overnight, even though a substantial part of our population already participates in a form of universal coverage, whether it be Tricare, Medicare or VHAP. We know how to do it, and we know how it can work, and we are striving to make it affordable and available to everyone.

I strongly support our efforts to make universal coverage happen in Vermont. If it can happen anywhere in a way that is honest and efficient, it is here. I am proud of the efforts made so far, and I know full well that we have many miles to go before we get there. I approach this endeavor with my eyes wide open, and as I have said publicly again and again, if we cannot figure out a way to provide excellent services better than we do now for a lesser cost, we cannot change the system we are working with now. I believe we can, and I believe we will have a difficult time convincing customers, clients, patients, providers and payers that it is the right way to go. But our hard work will either make it happen, or it will show that it can’t, and no one should regret that or feel bad for trying.

(Update February 2015: In December 2014 Governor Shumlin announced that he would be postponing progress on Vermont’s push for universal coverage. Since then, he has announced a number of efforts that continue our ongoing reform of our health delivery systems, and has proposed initiatives that will help alleviate the cost shifts that affect our base insurance premiums. I appreciate the effort the administration has put into the homework needed on this issue, and the acknowledgment that in the current political and economic climate, regulated in large part by Washington, D.C., it is not fiscally prudent to move forward. I am disappointed, and I expect will continue incremental change until we are assured by the federal government that we will be able to move forward in a way that allows for true savings.)